This online shop is using cookies to give you the best shopping experience. Thereby for example the session information or language setting are stored on your computer. Without cookies the range of the online shop's functionality is limited. If you do not agree, please click here. x
You are here: / Submarine Kits / AKULA K-317
NO SHIPPING
June 25 - July 1
Orders will be processed
but not shipped before July 2, 2021.
Back to overview 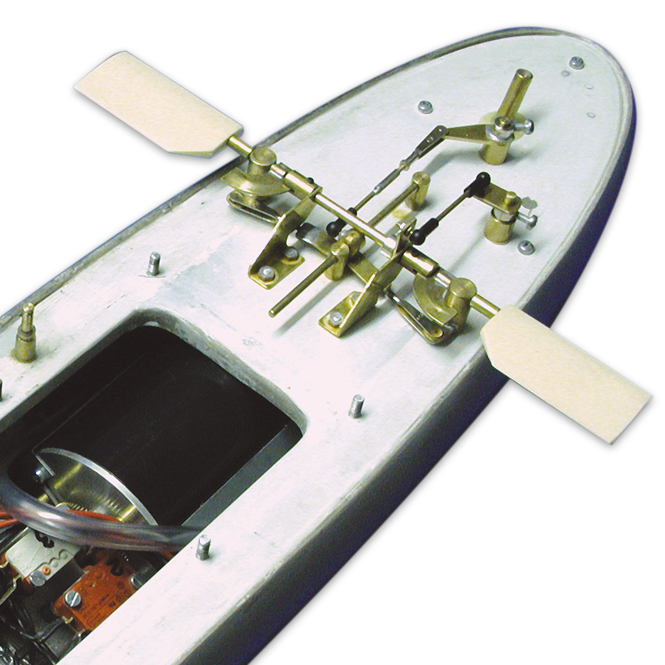 Mechanism for retraction and operation of the front dive planes.

This option allows not only better handling for transport but also better performance of the model.

The new electronic control unit RME prohibits the dive planes to be retracted unless these are in neutral position.

Both servos, for dive plane as well as retract servo, are connected to the RME at 3-pole pin rows marked A and B:
A: dive plane servo
B: servo for retraction/extraction of dive planes

• Connection: Wire lead marked “Rx” is plugged into dive plane servo channel of the receiver; alternatively, this can also be a pitch controller.

The second wire lead, marked “Prog” (and knotted), connects to another channel of the receiver. This channel is only used for initial adjustment of the mechanism’s end position “fully retracted” and “fully extracted” via a proportional channel on the transmitter (control stick). After this has been done, pull the wire off the reciever; it remains redundant unless the mechanism requires readjustment.

• Control: As soon as the pin on the RME marked with “-“ is connected to ground (e.g. minus polarity of reiver battery) the unit switches the dive planes to extract. This function can be switched by a so-called Decoder (like robbe Multi Switch or Graupner Nautic) or by electronic 4-channel switch MINI, item no. 8431.

• Adjustment: For initial setup only the retract servos needs to be connected to the RME. Both wire leads, “Prog” and “Rx”, must be plugged into the appropriate channels of the receiver. No linkage (clevis) is connected to the servo arm, yet. After having powered up the receiver the servo turns to position “fully retracted”. The linkage is now to be connected to the servo arm so that the dive planes actually correspond to the position “fully retracted”.  Then switch the mechanism to “extract” (via Decoder of 4-channel mini switch 8431).

Both end positions can now be fine tuned via the “Prog”-channel. Then the “Prog”-cable is removed and left idle.

Plug the dive plane servo onto the RME and ensure that servo trim on your transmitter is in neutral. Connect linkage to the servo’s control arm. Servo throw might need to be limited (if your Tx features such adjustment) so that the planes do not collide with the base of the mechanism.

• Operation: As long as pin marked “-“ is switched to ground, dive planes remain extracted. Once switched off, initiates the retract mode. First the dive plane servo is automatically brought to neutral; then, after a short pause, the dive planes are retracted.

Please note: The RMR should only be operated in combination with digital servos (item no. GR7946). “Normal” servos tend to twitch in the instant when the receiver is turned on. This happens while the dive planes are still retracted, putting quite some tension on the servo gears as well as the dive plane mechanism. A digital servo does not show such behavior as it will only respond to actual control impulses.

• Servo Reverse: Direction of rotation does vary amongst servo brands. Servo rotation can be inversed by plugging or unplugging the jumper on the RME.

WITH jumper: robbe/Futaba
W/O jumper: Graupner