This online shop is using cookies to give you the best shopping experience. Thereby for example the session information or language setting are stored on your computer. Without cookies the range of the online shop's functionality is limited. If you do not agree, please click here. x
You are here: / Electronics / Sound Modules
Back to overview 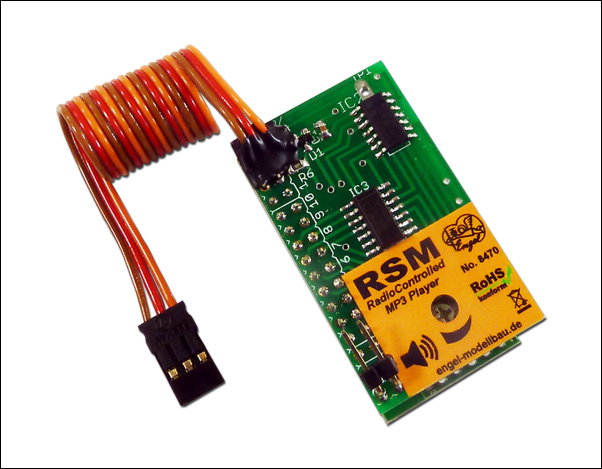 This sound module is fitted on to a MP3 player and can play 20 MP3 or WAV files through a single R/C channel. The module is connected directly to the receiver and operates the MP3 player electronically allowing playback of all 20 sounds or playlists via a control stick or switch on your transmitter.

Sounds and playlists are stored on a micro-SD card which is fitted in a slot of the MP3 player. The micro-SD card already contains 20 sounds such as sonar ping, Diesel engine, steam whistle, countdown, helicopter and alarm signals. Sounds can be stored and playlists configured at your own choice.

The loudspeaker (8 Ohm) is connected to 2 pins on top of the module. Volume can be adjusted by a rotary switch on the MP3 player. All other functions are controlled via the transmitter.

Setup requires no modifications on the transmitter as the module is operated simply by the control stick or a switch on your transmitter.

Supply voltage is 4.5 to 5.5 Volt which corresponds to a battery pack with 4 NiMH cells or standard BEC (power supply via speed controller).

Example: Activation of sound 3
Move stick (or switch) twice to the left, repeat a third time and hold stick for about 1 second until sound 3 is heard. Sounds 1 to 10 are activated by moving the stick (or switch) in one direction. Sounds 11-20 are activated by moving the stick in the opposite direction. This direction for playback depends on the transmitter and can be reversed by the servo reverse function of the transmitter (if your Tx offers this feature).

Sounds 11-20 can also be activated through playlists which start with a delay of about 3 seconds. Playlists can consist of a sequence of different sounds as well as a repetition of identical sounds.

PLEASE NOTE: A loudspeaker is not included! We recommend a loudspeaker with 8 Ohm and minium power rating of 1 Watt.